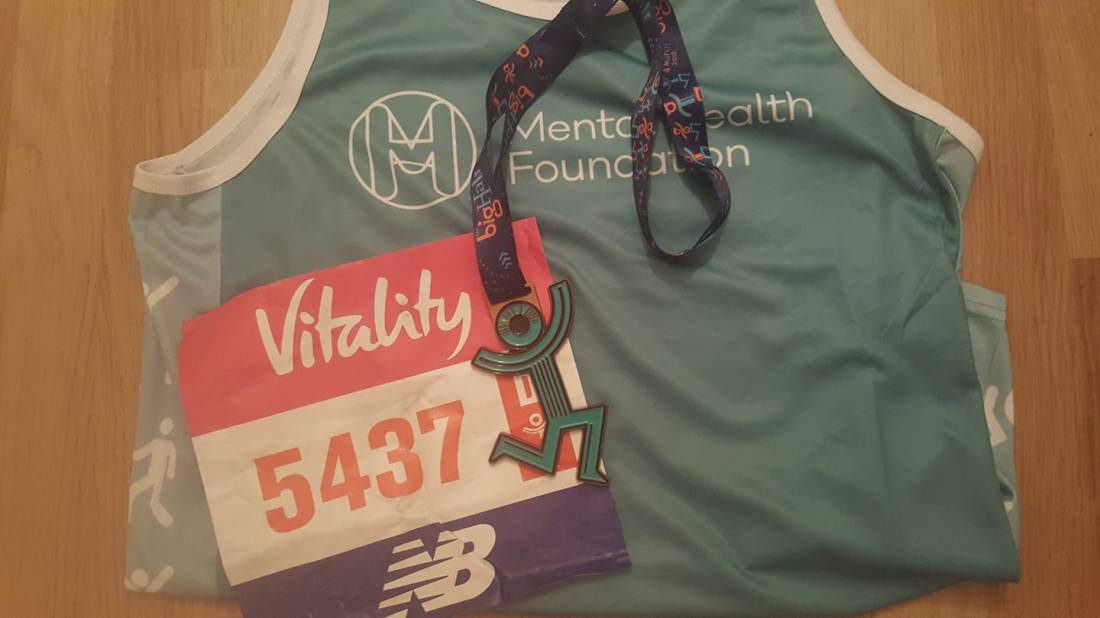 The first ever Big Half took place on Sunday 4th March. My plan going into the race was to use it to gauge how my training so far is going. It turned out to be a great race, more or less most of the first half of VMLM in reverse.

Huge thanks must go to the organisers and all the marshals and volunteers who made it possible.

I had gotten a place thanks to community places made available to Greenwich parkrun. I really liked the idea of providing community places to those from the course boroughs. It gave this big event a bit of identity I felt.

The Beast From The East and Storm Emma hit days earlier so I had to alter my planned runs that week. I originally thought I’d just stay indoors in the warm to avoid injury but mid-week I was itching to get out so dug out my trail shoes and donned the head torch and got out in the snow with a few club mates on Wednesday evening and with Amy on Thursday. What satisfying runs those were!

We got the 06:57 train to London Bridge meaning a 05:00 alarm, an early start, but only because pre-race instructions indicated that bag drop would close at 08:20. Amy (along with some of her 261 club mates) went to Green start, so I took the wander on my own to Tower Bridge.

If there was one thing to criticise (which I feel bad doing) it was the lack of space in the bag drop area on Tower Bridge Road. At 08:30 it turned into a bit of a melee and I don’t think that this may have been the best place to site the bag trucks given the numbers present.

The race was started by four people (one each from each of the course boroughs) and one of the four was Dame Dibaba from Kent AC who I’ve mentioned before in another post. His story is inspiring and I gave him a quiet cheer of my own when he was announced by Geoff Wightman.

My race plan had been to run with the Runners World 2 Hour pacer but he started a little way ahead of me and as a slow starter that likes a wind up over the first mile, I never caught him. I need to bear that in mind for VMLM and, if possible, stick as close to my chosen pacer as possible when I get in the start pen.

I met up with club mates and other runners from my Eltham ends at Tower Bridge, most of whom, were in B and C pens. I did spy club mate Alan in D pen though and, since we run near similar parkrun times and keep the same pace during club runs I thought that I’d stick with him.

There was a nineteen minute delay between the elite start and the start of Orange block D. There was a short bit of the course early on, at mile 2 in fact, where the elite men, women and faster club runners came back the other way. It was great to see TDR club mate Chris Millett and NEJ club mate Martyn Millard flash past in that section.

One of the runpix stats emailed to all participants showed my course position at the point when Mo finished, a slightly mental illustration of the speed of elite runners.

It was great to run along parts of the marathon route, and see bits of this city I never go to, and finally run past all those places (Narrow Street, Canary Wharf and Creek Road) where up until now I’ve only stood to spectate and cheer on my friends on Marathon day). Unusually, the race route went through the Limehouse Link Road tunnel to approach Wapping and Canary Wharf.

I’m not sure I enjoyed that section much and my watch lost its satellite link while down in there, but there’ll never be another chance to use it as a pedestrian if I ever find myself up round there again. A mobile DJ who had set himself up on the tunnel exit ramp provided a very welcome return back to daylight. There were also some cobbled sections that slowed me up, but these were thankfully only very short.

I found early on that I couldn’t maintain 2 hour pace and fell behind Alan (the very same thing at the Alan Green Memorial Ten in Broadstairs in December, but felt better about that happening this time), so I reverted to B Goal, which was to test what I think will be comfortable marathon pace for 22nd April.

I found some pace again in the final quarter of the race in Rotherhithe and felt satisfyingly strong still running the last couple of miles through Deptford and along Creek Road back into Greenwich (my home borough) to the finish at Cutty Sark. I’ve incorporated Creek Road (Westwards into Deptford) into a few of my previous long runs prior to another marathon and it felt great to run along it the other way.

My adjustment to B Goal and my overall finish time demonstrates a couple of things:

That I’m now comfortable running just over two hours for a half. I might not have been two pleased to have to dial back my race strategy mid-race but, on reflection, a comfortable 02:09:57 wouldn’t have been something I would have even thought I was capable of, or would even consider in 2014.

However, I’m still feeling the effects of poor immediate post-race recovery and really
need to do something about it. Better Recovery probably starts with better preparation, hydration and in-race fuelling. This is probably going to become the most important part of 2018’s marathon preparation.

View all posts by willmatthewsrunner

One thought on “The Big Half – Sunday 4th March”

I’m in dire need of an outlet. Cue what I’m calling RDR. Quite unexpectedly I have places in two World Marathon Majors in 2018. This is where I’ll be recording my thoughts on the journey to those races and beyond.