Skip to content
willmatthewsrunner Uncategorized December 30, 2018December 30, 2018
2018 comes to a close and I’ve spent the latter part of the year post-Berlin attempting to rehab a soleus strain that is now only wearingly frustrating in its persistence. Too much too soon. Another unexpected lesson in patience but one I’m happy to receive.

Look at what I have to show for my efforts though! 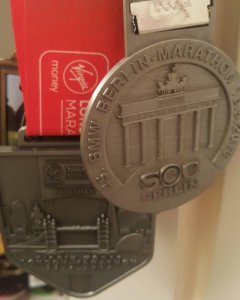 More importantly, despite things not going quite as I might have initially intended, I have a year of personal progress, milestones and achievements to look back on and be proud of. That includes a race photo I’m happy with! 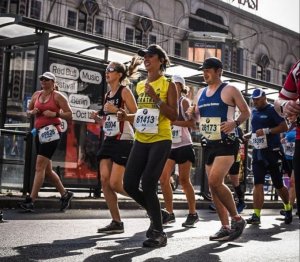 I realised somewhere during the year that the fog of pressure of two World Marathon Majors got in the way of my enjoyment of one the few things I do for fun. It is only after I’ve had time to reflect on things now that I can’t run all that far at the moment that I have realised that there is no place here for pressure. This is what I do for fun, to enable me to process all the stuff going on and potentially grow as a person. There is only room for pleasure in this pursuit of mine (ours).
What’s more, I find only now through injury and yet another set of missed cross country fixtures that there really has been a change. One that has caught me by surprise a little. It’s that I miss running and the small amount of freedom it brings to my day.
A future that doesn’t include running isn’t something I’m now willing to entertain the thought of for even a few moments and to be honest that’s something that has caught me a little by surprise. I will work to get back to where I was because I like the place I got to and in a backward step there lies only misery. This is no exaggeration.
Let me be honest here: I have not always found much, if any, enjoyment in movement. I was never particularly good at team sports to begin with and that framed how I felt about my participation in sport for almost all my life. Then I began running in late 2014. I was overweight and something needed to happen if I was to avoid obesity and better manage the poor mental health I was experiencing.
I never actively made a decision to change my life but that is certainly what has happened. The question arises then about why I run. My answer, as you might now have perhaps come to expect, is a long one.
Through running my body has achieved much that I could not previously have thought it capable of, but running is both a strange and wonderful thing. The creep of achievement, personal progress, improvement and even ambition can be so gradual that you don’t notice the positive change in mindset that goes with it. This what I have gained from running and I have got here and achieved it mostly because I have chosen to. A few years ago I was sure that I could and would never run a marathon and now I have run three. I’m no longer interested in whether I can. What’s important now is how well I do what I set out to achieve and how I go about chasing down the personal goals I set myself.

View all posts by willmatthewsrunner

One thought on “Why do I run?”

I’m in dire need of an outlet. Cue what I’m calling RDR. Quite unexpectedly I have places in two World Marathon Majors in 2018. This is where I’ll be recording my thoughts on the journey to those races and beyond.